As a result of the ongoing situation regarding Covid 19, we are operating on limited availability basis. We are therefore not taking bookings via our online booking engine. Should you wish to enquire about availability or make a booking please call 01952 541262 to discuss your requirements.

Ludlow is one of the most impressive castles you can visit in Shropshire. Situated in the picturesque town of Ludlow, the romantic ruin sits on hill, giving impressive views of the surrounding countryside.

A Rich and Varied History

Ludlow Castle has had a long and chequered past. It was one of the first stone castles to be built in the UK, after the Norman invasion of 1066. Walter de Lacy arrived in England during this time and his sons, Roger and Hugh, built the earliest parts of the castle.

Over the next 200 years or so, the castle changed hands numerous times, and various additions were made to the fortifications. Eventually, in 1425, the castle came into the possession of the Crown and was made the seat of the Council in the Marches of Wales. A very grand title that essentially meant it served as the capital of Wales.

This lofty position gave the castle significant status and prestige – the castle was outfitted more as a stately home and hosted a number of cultural and political events. However, during the Civil War, it was besieged by Parliamentarians. Much of the wealth was sold off and Ludlow Castle never really recovered.

The ruins of the castle are as rich and engaging as the history. Surprisingly intact towers give fabulous views over the surrounding countryside and the number and variety of ruined buildings will intrigue and delight anyone with an interest in the past.

There are shops and refreshments available to visitors – pick up a souvenir from the gift shop or browse the Castle Gallery, home to a range of pictures, art pieces and more. Or maybe you’ll making a beeline for the castle café – we wouldn’t blame you.

Of course, there’s also the town of Ludlow to visit as well. Like the castle, the town itself is old and beautiful. Wander the winding, cobbled streets and marvel at the wonderful old buildings and architecture.

With an astonishing number of independent shops to visit, there’s truly something for everyone. There are many places to enjoy delicious, local food too – perfect after a visit to the castle.

Ludlow Castle is a bit further afield, taking about an hour to reach by car from Meeson Hall. However, it’s well worth a visit and the journey will take you through some wonderful countryside.

It’s also worth mentioning the castle grounds are dog friendly and there is wheelchair access to parts of the site.

Opening times vary depending on the time of year and what events are running, so it’s best to check on the website before setting off. 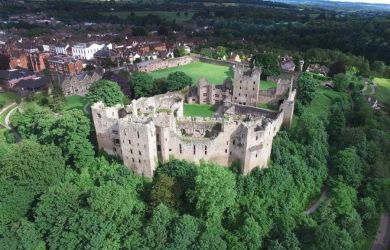