As owners of a Shropshire manor house hotel, we know an impressive country pile when we see one. This fortified building is part castle, part country house, and it’s stunning. In fact, Stokesay Castle is widely regarded as one of the finest medieval manors in England.

The house was built in the 13th century by Laurence of Ludlow. He was a wool merchant – the richest in England. With its strong stone walls and moat, Stokesay Castle is an impressive symbol of power and wealth, but it’s also a beautiful building with many original features still on show.
The ochre-yellow and faded grey wood of the half-timbered gatehouse is immediately recognisable. You can also see the great hall, the north tower and the solar, which was a private room for Laurence and his family.

Alongside the manor house is the church of St John the Baptist, which is interesting in itself. It was built around 1150 and featured carved box pews, a double-decker pulpit and lovely stained-glass windows.
The church even played a role during the English Civil War, with Royalists hiding inside. They thought the Parliamentarians wouldn’t attack a church, but they were wrong. The south side was badly damaged by what’s though to be cannon fire.

Stokesay Castle is in Craven Arms, not far from Ludlow. It’s just under an hour from Meeson Hall, and it’s well worth the trip. There are some pretty country walks on offer from the car park, so it’s a great location to head for a day out. You could also follow up with some shopping or a meal in Ludlow itself, which is a beautifully quirky place, with old streets, interesting shops and a castle of its own.

Opening times vary throughout the year, so check the English Heritage website before your visit. 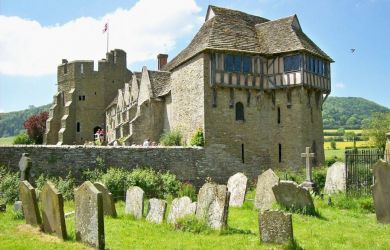 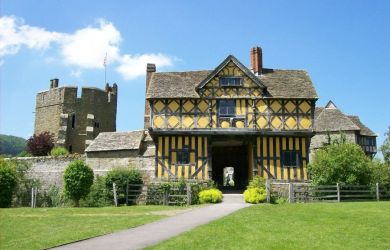